A LITTLE TASTE OF WALES

I’ve been so wrapped up in the birth of my first granddaughter that I’ve neglected my duties as a cook and as a blogger.  So, I’m jumping back into the fray with a recipe that takes us back to my husband’s home country – Wales.

Welsh Cakes are so easy to make that you’ll find yourself stocking up on the little darlings frequently. Easy to nibble, delightful with a cup of tea (of course!) or coffee, they take the edge off of the hunger that creeps up on you during the day or even while watching late-night television.

As I measured and mixed, I realized that this “one bowl” dough is a good lesson in using the kitchen scale. So please forgive if I sound like the teacher I was trained to be!

METHOD:
Kitchen Scale. Bowl.
Zero out the scale. Place bowl onto scale and zero out again. 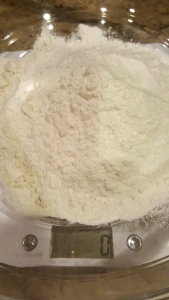 Mixed Spice. Baking Soda. Pinch of Salt.
Add to bowl.  Zero out scale. You’ve got the routine down-pat by now!

Butter.
Add to bowl until scale reads 100 grams. Remove bowl from scale and work the butter into the flour mixture with your fingers until it’s crumbly.

Currents.
Place bowl back on scale. Zero it. Add 50 grams of currents. Remove bowl from scale.

Egg.
Add egg and mix with hands until you have a soft dough. If it seems dry, add a splash of milk until the consistency reaches that of shortcrust pastry.

Extra Flour.
Spray a bit of flour on the workbench and roll out the dough until it reaches the thickness of your little finger. Pick up and turn the dough as you roll.

Turn the electric griddle on to 275F.

Cookie Cutter.
Cut rounds and place on heated griddle. Reroll remaining dough and cut some more until all the dough is used.

Cook the cakes for 3-4 minutes on each side. Test for doneness by touching the tops. If they seem hard, they are done. Do not burn. Check the bottoms after 3 minutes. They should be golden brown.

Remove Welsh Cakes to platter and sprinkle with sugar.

The Welsh have been eating Welsh Cakes since the 1800s, so you are munching on a bit of history!!!

Mwynhau! (that’s one of the Welsh words for Enjoy! Try to say it with a Welsh Cake in your mouth!)

This site uses Akismet to reduce spam. Learn how your comment data is processed.